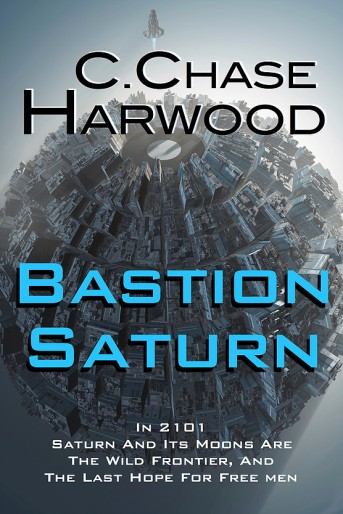 I can’t remember what it was that made me go out and buy this book. I know I found out about it through Amazon’s email adverts, so maybe I am just very easily persuaded. Either way, it was a good buy. A fun romp through Saturn’s moons, featuring tons of action and some pretty good humour. Bastion Station was published by Kindle Press after being selected as a winner of the Kindle Scout program. Whilst the story was far from perfect, it was still pretty good and has encouraged me to check out more titles in Kindle Scout.

Let’s start with what makes this story far from perfect. First off, it started with what I see as three different prologues.  Once it gets into the story, its good, but as I was reading at the start I felt let down, despite the prologues containing some good writing. The slow start and the resulting bad first impression made me more surprised when later I really got into this book and had trouble putting it down.

I’m also not a fan about the way the story treats its female characters. The three female leads are all very sexualised and their cup size is mentioned a lot. It was uncomfortable reading at times, though it’s hard to tell if this is misogynistic writing, or just a fair way to portray a viewpoint character who is a bit of a douchebag. And yes, Caleb Day is a douchebag, despite his heroics. Aside from objectifying the women on his team, he also gets way too pissed off at one point after getting called a douchebag, and in a fit of pure macho almost messes up the gravity of a small moon. Oh, and he is also rude to the robot; who is a much more likable character than our hero. Since Caleb is meant to be a bit of a macho douche, and the female lead Jennifer does get some pretty good action scenes and saves the day a few times, the objectification didn’t stop me from enjoying the story too much.

Aside from all the uncomfortable gender issues, this book also falls short in the editing. There are grammatical errors, and sometimes the changes in perspective can be disorientating, since they happen with no warning. Now, reading all this, you may be wondering about the 6.9 rating. I’ve never done such precise ratings before. The thing is, I see 5 as being ‘meh, it’s alright’, with 7 being ‘good’. I found this book to be good. I mean, the writing is worse than The Aeronaut’s Windlass, which I gave a 6, but the thing is I simply liked this story a lot better than Windlass. I had a blast reading Bastion Station, despite all the problems with it. I want to give this book a 7 because I enjoyed it, but I don’t feel justified in doing so because of how cringeworthy some scenes were. So, 6.9 it is.

After that discussion of ratings, I better get to what makes this book good. Mostly, it is the action. Our heroes are constantly going from one crazy situation to another, and the crazy ways they get through it all were a blast. And even though the situations were crazy, they were plausible. When they were trying to escape from the moon Albiorix was especially hard to put down. The humour was hit and miss, but when it was hit it was glorious. Again, the Albiorix escape and a guy named Jook come to mind straight away. The science was well researched, though there were some parts where it was ignored for dramatic purpose This book reads like a Hollywood movie, and is a bit of a throwback to older space operas, that asks how Humans would respond to a singularity and the emergence of AI. There was also some really good writing tucked in there; such as when we read about a nanobot attack from the point of view of the last survivor.

So, there you have it; a good space romp from a new author. Fun read, though a bit problematic in some areas. Also, there was one big question that bothered me. The Saturn System is described as the last bastion of free humans. We get to see what happened on the Moon and Mars, but Jupiter and its moons are never mentioned at all. I know that people were drawn to Saturn because of the possibility of colonising Titan, but you’d think someone would have decided to settle in the Jupiter system.