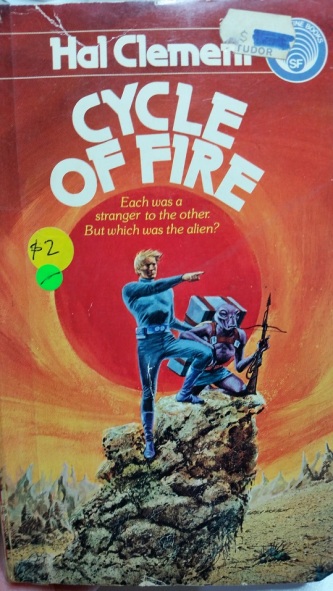 I have in the past labelled some science fiction stories as ‘hard’, without fully explaining what that means. To quote Wikipedia; “Hard Science Fiction is a category of science fiction categorised by an emphasis on scientific accuracy.” Originally terms like ‘hard’ and ‘soft’ differentiated between the ‘soft’ sciences (i.e, social sciences) and ‘hard’ sciences (natural sciences), however the distinction has since become more about the relationship between the science and the rest of the story.

Science Fiction stories can be thought of as existing on a spectrum between soft and hard. For example, Star Wars explains none of its technology, and the Force is almost a fantasy element. The story in Star Wars is a very space opera one, that could conceivably be retold as an adventure or western with a bit of creativity. Meanwhile, Star Trek often has episodes that revolve around technology or bizarre alien biology. Hence Star Trek is ‘harder’, science fiction-wise, than Star Wars. However, a lot of the technology in Star Trek isn’t fully explained, and whilst there is usually an internal consistency, Star Trek technology and worldbuilding isn’t always scientifically accurate. Thus, Star Trek is still on the ‘soft’ side of the spectrum.

At the very end of the ‘Hard’ end of the spectrum, you’ll find Hal Clement. Clement and some other hard SF authors of the time saw their stories as a game. The objective of the author was to create a crazy world and crazy situations whilst adhering to the known laws of reality. The objective for the reader was to find mistakes. This approach leads to some amazing worldbuilding, but it also results in less emphasis on story and characters, and whilst I have enjoyed everything I have read by Clement, his work is dated, and not just because of 1950s morality (though, this story does contain a Human going to a planet and meeting pre-industrial age aliens and we know how that is usually played in this era. I think Cycle of Fire treats the subject better than most other books of the time, but it is a very 1950s worldview at work here.) The prose itself isn’t something that modern writers would do. The narrative switches between the thoughts of both main characters without any type of break (though I feel this works, given the narrative voice) and towards the end of the book we get pages and pages of exposition about the planet’s history and the biology of the aliens on it.

Keep in mind though, that Hal Clement is a master worldbuilder. Reading pages about Humans researching an alien planet and reporting their findings is fun if you enjoy natural history and the research is being done on a crazy Hal Clement world with two suns, or 250x Earth’s gravity. Also, Cycle of Fire is short. I’ve read a lot of hard SF that occasionally gets bogged down in the technical details and I end up skimming, but such books are usually huge doorstoppers. Meanwhile, Cycle of Fire is under 200 pages, so the info dumps are out of necessity kept short and are better integrated into the story.

If you can keep in mind the time period in which Clement wrote, and the aim of his stories, then it quickly becomes apparent why he is considered a Grand Master of science fiction. In his most famous story, Mission of Gravity, we are taken on a romp on a planet with 250x Earth’s gravity and a day length of about nine minutes. Cycle of Fire isn’t as well known, but the worldbuilding is still amazing and almost as crazy.

We find ourselves on planet Abyorman, following Dar, a native pilot who has crashed his glider and must traverse a barren volcanic landscape to get his precious cargo – his books – to the Ice Ramparts. Along the way, he meets another castaway; space cadet Nils Kruger. Kruger was part of an exploration team, but was left behind after an accident which led the team to conclude he had died. The two must travel on foot across a planet in a binary star system, and use a combination of Dar’s supreme intellect and knowledge of the planet and Kruger’s willingness to experiment and experience with higher technology to overcome a range of challenges.

The characterisation of Dar and Kruger is somewhat lacking, but it was enough that I came to believe they had a close bond and found their last conversation touching. Of course, the draw of this book isn’t the characters. It is the world. Abyorman is the only planet in a binary system, and it goes through intense seasons that kill Dar’s people en masse every 60 odd years. The true nature of the world and its people is obscured for most of the book, until Dar and Kruger’s journey comes to an end, and then they help some researches find out everything they can about the world. We get many chapters about the geological and evolutionary history of Abyorman, and it is fascinating stuff. I also loved how all this new knowledge impacted Dar. His whole view of his world and his place in it was upturned by the humans and he took it in stride.

An interesting thing about this book is that Dar’s people are shown to be more intelligent than Humans, even though they’re level of technology is so much lower. Kinda progressive for the time, but the way the Humans respond to meeting supposedly superior aliens says a lot about the time period this was written in. But writing about colonialism and racism in old SF could make a post of its own.

It’s also interesting reading Cycle of Fire because it comes before Star Trek made the Prime Directive such a huge part of alien stories. Dar joins the human researches and they encourage him to learn as much as he can from them. In fact, the aliens ask the humans to stop sharing so much science, since they are concerned with how that will impact their way of life. The humans view the alien that made that request as “an opinionated, narrow-minded, dictatorial old fuddy-duddy.” Interestingly though, arguments are made that support the Prime Directive attitude.

I thoroughly enjoyed this book. I would recommend it in a heartbeat to anyone who loves classic SF, and anyone who likes hard SF. Even if these two things aren’t your jam, I’d still encourage anyone who loves science fiction to read a Hal Clement book at some point for the historical value. Just keep in mind the time it was written in and the way Clement approached his writing. Also, it’s nice to know that you can write hard SF without destroying an entire forest. Whether I’d recommend Cycle of Fire as the Hal Clement book to read though is a difficult question. The only other books I have read are the Mesklin ones (Mission of Gravity and Starlight). Cycle of Fire is a lot more accessible than that series, and I liked the characters better. However, Mission of Gravity has much better worldbuilding (remember that part about a nine minute day and 250x Earth’s gravity?), which is really what you’re looking for in a Hal Clement book.

One thought on “Review – Cycle of Fire”