The Fox’s Tower and Other Tales 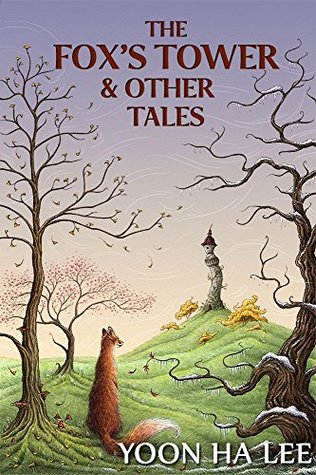 I purchased this collection after I first read Ninefox Gambit and then forgot about it. The Fox’s Tower is a collection of Yoon Ha Lee’s fairytale-inspired flash fiction, which is not my usual thing, but I love Yoon Ha Lee’s writing so much I felt compelled to give it a go and damn I am glad I did.

Flash fiction (stories around 1000 words long) is hit or miss with me. Some stories pack a big hit in a little package, others I just don’t get or wish there was more to them. This collection also had some misses, but even stories I didn’t get, I still enjoyed, because Lee is an absolute master of the format. Every word is carefully chosen for vibrant imagery, and some stories feel more like poems. Yoon Ha Lee is an amazing writer, and this collection shows off his skill.

The stories all had a fairytale/East Asian folklore feel to them, but I didn’t recognise any as retellings. Not that that is saying much, since I grew up with European fairytales. There were quite a few fox stories, as the name suggests, and as far as I know they keep to the mythology of the magic trickster fox. Most of the stories are also written as fables, and makes you think about their meaning. Each story has a lot going for it: message, meaning, worldbuilding and characters, and it’s amazing that everything fits and works together so well in such little stories.

Some stand out stories for me include The Stone-Hearted Soldier, The School of the Empty Book, The Fox’s Forest, The Youngest Fox, and The Firziak Mountains, even though I don’t drink tea. Seeing that little list I just made, I can think of many other stories that deserve praise, but then I may as well list nearly all of them. These stories contain a lot of magic, and a lot of wonder. They also contain mostly female characters, including women as soldiers and rulers. There are also many queer couples and characters who are either non-binary or whose gender isn’t revealed in this collection, which was nice to see.

My biggest complaint about this collection is that it does not come as a physical book. This collection would be perfect in a nice hardcover book that can be picked up and flicked through at any time. I got the next best thing by getting this collection on my kindle, but most of these stories can be viewed for free here on Yoon Ha Lee’s website, along with more of his flash fiction.

Whilst I’m on the topic of Yoon Ha Lee, I have just found out that the final book in his Machineries of Empire now has a title: The Revenant Gun. Every source I’ve found seems to indicate it’ll be out around June next year. I cannot wait to get back into that world.