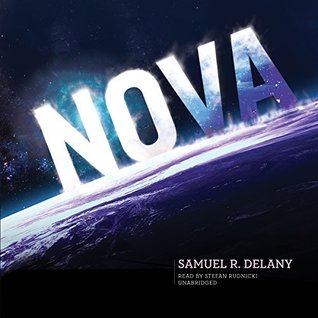 Wow, I knew this book would be a fun read, but I didn’t realise I would be coming across a hidden gem. If I had done some research I would have known what I was reading. Algis Budrys once said:

“Samuel R. Delany, right now, as of this book, Nova, not as of some future book or some accumulated body of work, is the best science-fiction writer in the world, at a time when competition for that status is intense. I don’t see how a writer can do more than wring your heart while explaining how it works. No writer can.”

But I have somehow gone my life never hearing about Nova. Whenever I thought Samuel R. Delany, I’ve always thought Dhalgren or Babel-17. I came across Nova after watching the Deep Space Nine episode where the characters are all 1950s science fiction writers  and then seeing if I could figured out who everyone was meant to be an expy of. Since I was looking for a new audiobook at the time and thought it sounded interesting, I grabbed it.

Nova is everything great about old-school space opera, yet in most places it still feels like it could have been written today rather than in the sixties. It mixes classic space opera tropes with allusions to the grail quest, speculation on how society can change in a thousand years, and lots of Tarot readings. Long ago, I used to believe Tarot cards actually had predictive powers. I’ve become a lot more sceptical and now think they’re just cards; but they are cool cards, and I enjoyed seeing them show up in this setting. It’s also nice to see an advanced, futuristic society still have their superstitions. Even though Tarot may actually work in this universe.

Nova follows Captain Lorq Von Ray, one of the most powerful men in the Pleiades Federation, on his quest to get rare and powerful elements known as Illyrion from inside an exploding sun. His rival is Prince Red; a rich, cruel, and crazy man with a cybernetic arm capable of crushing sand into quartz. His crew are a varied bunch, and the trip takes them to a couple of fascinating worlds. On the surface it’s a fun space adventure story, but there are so many layers to this story. So many ways to read it. Pure space opera? A grail quest? Social Speculation? Moby Dick in Space?

Delany’s writing is beautiful. Right at the start we meet the character Dan, who has been blinded, deafened and had all his other sensors damaged by looking at a nova through the ships sensory input. Dan’s description of what happened was poetic, horrific, and conveyed how cybernetics worked in this universe without feeling like exposition. From that first page; before I had even been introduced to Lorq Von Ray or learnt of the quest, I knew just how epic and dangerous this quest would be. Seriously, hearing Dan describe what happened to him was one big holy shit moment, and it happened right on that first page..

The word ‘page’ is misleading in this review, since I listened to this as an audiobook. After listening to the book and then learning more about how it was written, I believe that reading the text and listening to the narration would be two very different experiences. In the print book, the header of every page is labelled with the date and location of the action on that page. This is helpful, as there are a lot of flashbacks, and sections have a tendency to end mid-sentence, which made following along with the audiobook difficult at times. On the other hand, narrator Stefan Rudnicki does an amazing job. The character voices are great, and he makes the unusual word-order used by characters from the Pleiades sound engaging and natural. It was also nice not having to guess how to pronounce the name Tyÿ (Tai-yee). As much as I enjoyed the audiobook, I think next time I read Nova, I will be actually reading it.

Another thing I loved about this book was the world-building. We see only a small part of the world, but so much more is implied. It makes this huge galaxy feel huge despite us only going to a few planets. One of the characters provides a lot of exposition about the universe, but because he’s a rambler and these long rants often end up turning into comic relief, it never feels like info-dumping. Even outside these explanations, small throw-away comments (“has it occurred to you that someone from the 21st Century would have no idea how we eat?”) give us so many insights and questions about this far-flung feature. There are so many little details like this that help make Nova an immersive read.

If you haven’t read any of Delany’s work before, Nova is an excellent place to start.