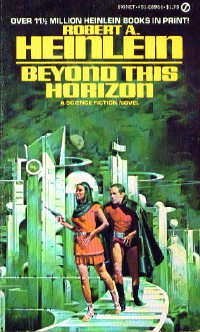 By Robert A. Heinlein (Writing as Anson McDonald)

I’m still thinking about how I feel about this one. I have read Heinlein years ago and enjoyed stories like Time Enough for Love, Job: A Comedy of Justice, and Stranger in a Strange Land but the last Heinlein story I read, Friday, I could not get into. I had a lot more fun with Beyond this Horizon. It contains a lot of amazing ideas, gems of quotable Heinlein social commentary, and some top-notch worldbuilding that even after 70 years feels exciting. However, I listened to this as an audiobook while driving to and from work. I got home on Friday just as a chapter finished, and I could see that I had twenty-six minutes of book left. I spent that night reading an issue of Asimov’s. (Shout Out to Liu Cixin’s The Sea of Dreams. Favourite novelette of the year so far.) There were pacing and storytelling bugs in this book so great, that I found myself near the end and being in no particular hurry to finish.

Let’s focus on all the good things about Beyond This Horizon. Heinlein often uses small details to make the future feel real. The best example is the famous line ‘The door dilated’, which has been praised for decades as the perfect example of an understated sentence that conveys a crystal-clear image of a high-tech future society. There were other little lines that did a lot to build this world. There are still info-dumps and a particularly obvious “And as you know…” spiel, but over all this book shows some of the future-making techniques that Heinlein has became famous for.

I suppose I should say what this book is about, and it’s here we get to some of my issues with it. It’s about Hamilton Felix, who lives in a world of positive eugenics and gun duels. He has been selectively bred to be awesome, and now the local geneticist wants to breed him with an equally awesome woman and make babies that are as perfect as possible. Hamilton refuses to have children until he knows the meaning of life. Then he gets mixed up in a future tiki-torch group that want to take over the government and use genetic engineering to make a society with castes (they get to be the leader caste of course). While this happens a man from the past (the 1920s) is found and tries to adjust to modern life, and Hamilton’s friend Munro-Alpha has problems in his love-life. Then the supremacist group tries to take over the world, and that plot climaxes about halfway through the book. After that we go on to the more mundane stuff about raising kids and researching supernatural stuff. I found this last section a bit boring, but then again children have never appealed to me.  There are a lot of interesting things in Beyond This Horizon. It’s worth reading for the ideas and world, but I feel it was too many good ideas jammed into too short a book to be a great novel. I read a lot I liked, but I found myself not excited about the book as a whole.

Let’s talk about characters. In particular, about the female characters. Heinlein does this thing where he writes strong female characters and supports equality between the sexes, but he also expresses a lot of gender stereotypes that come across as sexist today. If you’re familiar with Heinlein, you know what I’m talking about. If you aren’t, then I’ll just say that modern readers are in for a bumpy ride. Especially for the scene where Hamilton meets his love interest Phyllis.

Phyllis is an interesting example of how Heinlein writes women. She goes armed, unlike most women in this society, and when she gets in a firefight she is shown to be highly competent. She’s also flirty and has a lot of agency. Yet at one point, she states that making babies is “what she’s for”.

I guess what I’m saying, is that Beyond This Horizon is fair for it’s time. Progressive for it’s time even, at least when it comes to women. Possibly for race too. There is an n-bomb dropped, followed by the phrase ‘what does your colour have to do with anything?’ Besides values, the scientific understanding about how DNA works has also advanced since Beyond This Horizon was written. You really have to keep in mind that this book was written in 1942.

None of the other characters stand out for me, male or female. They were fun, but not memorable. If you haven’t read Heinlein before, then this isn’t the best place to start, but if you keep in mind the time it was written it’s still got a lot of good things going for it. I just wish all those good plots and ideas came together better.