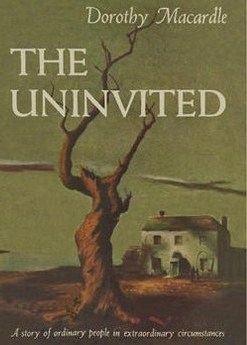 A ghost story set in England during the 1940s. It read like a period drama and as I started reading I really did not expect to enjoy it as much as I did. The writing is beautifully descriptive, the characters are amazing people to go on such a journey with, and I loved how they went about dealing with their haunted house.

The Uninvited was originally published in 1941 under the title Uneasy Freehold, and then in the following year was published in the US under it’s current title. In 1944 the book was adapted into a movie, which was notable for being the first film to portray ghosts as ghosts, rather than illusions or comical misunderstandings. The trailer can be found here. I haven’t watched the movie yet, but if you have seen the 1944 movie, keep in mind that like all adaptations the book is different.

The book was wonderfully written. It is about brother and sister Rodrick and Pamela moving out of London to their dream house in the countryside. The house is a mansion by the cliffs that needs a lot of work, but they are still amazed that they were able to afford it. (Maybe the term ‘mansion’ isn’t technically correct, but it was a big house with lots of rooms. I wish I could afford a place like that by writing reviews.) I was excited for them, and when they started being woken up by ‘disturbances’ I was invested in their problem. I really wanted them to find a way to stop the haunting and live in their beautiful house in peace.

Unlike other books I’ve been reading lately, The Uninvited had a very English drama feel to it, and was definitely more literary than the genre fiction. The fact that it’s set in a different time meant that, like when I read Frankenstein in Baghdad earlier this year, I occasionally felt like some parts flew over my head, especially in some conversations. It didn’t stop me from enjoying the story though, and I think I really needed a break from classic SF, so The Uninvited went down well.

I found this book nearly impossible to put down. Rather than treat the ghost as a mindless angry monster, Pamela and Rodrick try to understand the haunting. They record everything, investigate the life and death of the house’s previous resident, and try to find a way to put the restless soul to rest. All the while they must look out for Stella, a young lady born in their house who is highly at risk from the ghost. The motives and history of the ghost made for an amazing mystery with a satisfying – though maybe obvious – ending.

Macardle’s writing really brings this story and the characters to life. The descriptions of the ghost and all the disturbances around the house were quite spooky, and while maybe it is tame compared to today’s horror/supernatural stories, if you love haunted houses and ghosts, this is a must-read.