So sorry everyone, I seem to have gotten behind in my Hugo Award reading and reviewing. Maybe doing both the regular Hugos and the Retros was too much for me. Or maybe I can blame getting my wisdom teeth out. It sucks when life gets in the way of reading.

Okay, I’ll be honest, there were a few newer books I couldn’t wait to read, and I finally finished Metroid Prime. Yes, an amazing game I got about sixteen years ago, I finished for the first time this month. I have a problem with distractions.

All six of this year’s nominees for the short story category are amazing. We have anime-loving robots, warrior spirits in swords, a world of wind-up toys, and much more. All six nominees can be read for free online, and I have provided links in my reviews. 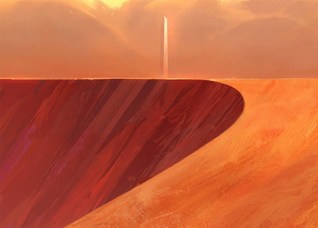 The Martian Obelisk is set in a world where there isn’t a lot of hope for the future. The titular obelisk is seen by some as a memorial or tombstone. I think one reason this apocalyptic future is so moving is that it isn’t technically an apocalypse. There is no single event that brings humanity down, but instead it seems that a wide range of problems take us down. As Nagata puts it:

‘It was not supposed to happen like this. As a child she’d been promised a swift conclusion: duck and cover and nuclear annihilation. And if not annihilation, at least the nihilistic romance of a gun-toting, leather-clad, fight-to-the-death anarchy.

That hadn’t happened either.

Things had just gotten worse, and worse still, and people gave up. Not everyone, not all at once – there was no single event marking the beginning of the end – but there was a sense of inevitability about the direction history had taken.’

This future is anti-climactic, but it is highly believable and therefore engaging. We follow architect Susannah Li-Langford as she uses remote technology to build a giant obelisk on Mars out of materials left over from failed colonies. Yes, Mars is dying too. Susannah’s lifework is interrupted by an unknown vehicle approaching the obelisk, and her and her patron must decide how to respond. From here we get a ray of light in this dark world, as Susannah decides whether to protect her work, or throw it away on a small chance to make the world a little better. The Martian Obelisk shows both the best and the worst parts of humanity, and stresses the importance of hope no matter how bleak the future looks.

This is such a fun story, I re-read it completely the very day after I first read it. In Fandom for Robots, Computron, the world’s only sentient robot – who is an old, obsolete box-shapes contraption – becomes a fan of a Japanese anime series that stars a robot just like him called Cyro. Prasad’s writing is super fun and Computron’s characterisation is amazing. This paragraph about Computron waiting for the next episode of his show pulled me in:

‘Computron checks his internal chronometer, as well as the countdown page on the streaming website. There are twenty-two hours, five minutes, forty-six seconds, and twelve milliseconds until 2 am on Friday (Japanese Standard Time). Logically, he is aware that time is most likely passing at a normal rate. The Simak Robotics Museum is not within close proximity of a black hole, and there is close to no possibility that time is being dilated. His constant checking of the chronometer to compare it with the countdown page serves no scientific purpose whatsoever.

We get a funny, quirky, and touching story about Computron connecting with other fans of Hyperdimension Warp Record and learning to write fanfics. There is a lot of humour as this unemotional robot interacts with an online anime fandom, but this story is more than just a comedy. Interacting with the fandom gives Computron a community outside the robotics lab, including a friend. The fandom also gives Computron an opportunity to teach other fans about older, non-android robots, and just seeing a robot like himself, facing robot-related issues, helps Computron overcome his own painful memories. This story is a wonderful demonstration of how empowering it is to see yourself represented in fiction, and the joys in being part of a fandom.

Farm boy Allpa lives in a medieval fantasy world and is given a magical sword by his dying grandmother. From the sword three warrior spirits – named Sun, Moon, and Dust – come forth to train him to be a master swordsman and help fight his enemies.

Allpa shows them how he grows potatoes.

When I first read this story, I found it amusing and thought the male/male romance was good for a 5000 word story, but I didn’t think it was award worthy. Reading it again, I appreciate it more, especially now that it’s clicked just what it means that this is a story about a young person in a fantasy setting getting a magic sword and a call to adventure, but happily staying home and tending his farm. Not everyone is an amazing hero, and that’s cool. As Sun says; “But there are all kinds in this world, and sometimes it is good to be reminded of that.”

This story didn’t blow me away in the same way the others on this list did, but it is still a charming story with fun characters that turns a staple fantasy trope on it’s head with good humour and a lot of heart. I’m glad I re-read it, because it is a fun, meaningful story that has earned a place on this list.

I was not expecting a story about wind-up toys to be so emotional. In this world, all the characters get wound up everyday by the ‘maker’ and the amount of turns they’ve been given dictates how much they can do. From the start, I loved how well this works as a metaphor for how much we have to do and how little time we get, but Yoachim ended up saying a lot more with this premise.

This story is about Zee, a girl with a good mainspring that can hold a lot of turns, often somewhere between 30 and 50. With her extra energy, she longs for a life of adventure, and one day when she has 52 turns (more than anyone she’s ever met) she skips out on her chores to go to the carnival. From there we follow Zee through the rest of her life, as she gets her adult limbs, eventually joins the carnival, gets married, and makes a child. Literally makes a child from spare parts.

Zee’s son Mattan gets 4 turns on his first day. He never gets more than 10. Zee has to spend her extra turns carrying Mattan, because walking would burn through all his turns. Mattan barely talks, because doing so uses up turns, which have to be saved for important things. Zee is looking after a disabled child, and despite her and Mattan being wind-up toys, the struggles of having to be a full time carer, and of needing full time care are accurately portrayed.

Carnival Nine is a touching story, brought to life by amazing worldbuilding and characters.

I didn’t really get this story the first time I read it. By the end, I figured it had something to do with the way the world sees disabled people, and I was mostly right. Despite the lack of clarity, this piece is able to convey a lot of emotion. You are being guided around a Victorianesque freakshow by the narrator, and everything about this story, from the view-point (second-person and low to the ground), the descriptions of the different rooms, the narrator’s tone, and the surreal nature of the story makes for a powerfully uncomfortable experience.

After a re-read and a bit of research on Fran Wilde, I felt like I got the story. Even before then, I got enough to appreciate Wilde’s writing and the experiences she was conveying. There are a lot of people out there who’ll find this story resonates with them a lot more than it did with me, and for those who don’t get it, you’ll come away with a lot to think about.

This was more a surreal experience than a story, and Wilde’s writing makes it a memorable, thought provoking experience.

Another second-person story, and another clever, uncomfortable story. In Indian Experience, we examine the damage done by cultural appropriation and the struggle to hold on to an Indigenous identity.

Whilst the story is told in second-person, the ‘you’ is not implied to be the reader. ‘You’ is Jesse Turnblatt, an Indian (Native American) man who guides tourists through virtual reality experiences. Jesse’s most popular experience is Vision Quest, a program that offers tourists a ‘dash of mystical Shaman’, ‘a spirit animal’, and ‘the approximation of a peyote experience’. In other words, a stereotype labelled as authentic. I wasn’t keen on the second-person perspective being used this way, but the story was good enough to get me past it, and at the end, I realised there was a very good reason why the story was told this way. Unfortunately, it’s impossible to talk about why this works without spoilers.

This is a brutal story, that addresses issues of race, identity, and cultural appropriation. I felt that the ending brought everything together, using the virtual reality technology in an interesting way to deliver its messages. I greatly enjoyed Roanhorse’s writing, and am now interested in her new novel, the Lightning Trail.

The deadline for voting in this year’s Hugos has snuck up on me. I’m currently finishing up the Novelettes and will have those reviews up soon. I’m also still working on the shorter fiction for the Retro Hugos; or at least, the ones I have access to. My thoughts on the best stories of 1942 will be posted here in a couple of weeks. Or in sixteen years.