Alright, I finished my Hugo reading just before voting closed, and now I present my thoughts on this year’s novelettes. Whilst writing these reviews, I realised that I tend to not find novelettes as exciting or memorable as short stories and novellas. Or at least, I haven’t come across as many novelettes that got to me as I have short stories and novellas. Maybe I should go on an awesome novelette binge soon. These five stories were a good place to start. Now onto the reviews 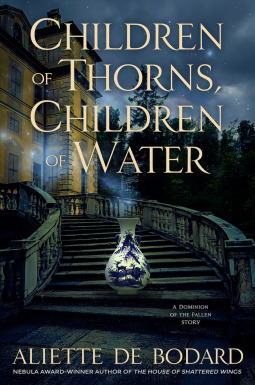 I didn’t really feel much of anything for this story. It was enjoyable, well written, with an interesting world and good characters, but I felt like I was missing a lot of context. This is to be expected, since this novelette is just the one of the latest entries in de Bodard’s Dominion of the Fallen series, and I have read neither of the novels set in this world. I think if I was more familiar with this series, I’d have enjoyed this story a lot.

The highest praise I can give this story is that it made me want to read the first novel in the series, The House of Shattered Wings. The setting is so intriguing; Paris has been devastated by a war between fallen angels, and in the aftermath great houses have taken over and wield magic. There is also a strong Vietnamese influence, with a Dragon Kingdom also residing in the city. It really interested me that most of the magic comes from the fallen angels, but the dragons have a completely different magical system, and it was cool seeing the two systems interact.

I wish I had more feelings about this one, but I don’t think my lack of enthusiasm should be seen as a negative. 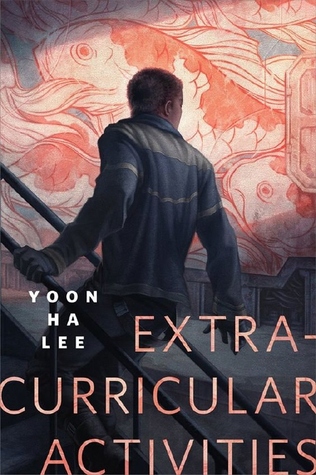 I enjoyed this story a lot, but I’m not sure how much readers unfamiliar with Lee’s Machineries of Empire series would get out of this. Those unfamiliar with the series may feel the way I did about Children of Thorns, Children of Water. So much of my enjoyment from this story was seeing Jedao as just a normal Shuos spy/assassin, before the whole Hellspin Fortress thing. This story also expands the worldbuilding of this universe, and it was interesting to see Jedao outside Hexarchate space.

Even if you haven’t read any of the novels in this series, this is still a fun little story, with a lot of humour, a clever caper, and some kinky uses for goose fat. The Machineries of Empire series is amazing space opera, and despite being a novelette, Extracurricular Activities captures much of the same feel. It was also different to the other stories in the series in that it doesn’t focus on the Hexarchate’s reality-altering mathematical technology, but on old fashion assassin business, with pathogen-based duels and hairstyle etiquette also playing a part.

Extracurricular Activities is very a caper, which features queer and poly characters and showcases a fascinating corner of Lee’s universe. This story is a must for fans of Lee’s work and of Shuos Jedao. For those unfamiliar with the series, the novel Ninefox Gambit is the best place to start.

At first I thought this would be all comedy and fluff. A tiny robot (less than 3cms in size, so, tiny tiny) is tasked by the spaceship it serves to kill a pest that gets termed ‘ratbug’. We quickly find out that our little bot is an old obsolete model that has been given busywork while all the other bots are busy rebuilding Ship, who has been sitting in a junkyard for years and is being taken out on an important mission. Ship and the human crew distrust older, multipurpose bots like the protagonist because they have a tendency to improvise, making them unpredictable. The story cuts between the humans discussing their serious mission, and the bot, who will stop at nothing to complete its mission to catch the ratbug.

And mostly, I got what I expected from this story. Our bot is so old it is simply called ‘bot 9’, whilst every other bot on ship has a four or five digit designation. It is also the only bot on the ship that doesn’t have access to the bot internet. It’s quest to slay the ratbug is quite amusing, but as we find out more about the human crew’s mission, the stakes get raised, and we are presented with a problem that requires a clever, very SF solution. Would definitely recommend this story.

This is an amazing gay vampire story that explores a lot of transgender issues. I had mixed feelings about it after the first read, but it has stuck with me. Finley is FtM transgender, and his life is changed when he is bitten by a vampire. A lot of my misgivings came from not liking the old vampire Andreas that turns Finn: Finn doesn’t consent to getting bitten, and yet the two end up having a somewhat friendly relationship. Andreas also has mind reading and strong powers of persuasion that fix just about every problem they come across.

But after a recent re-read of Small Changes, I find myself cutting Andreas some slack. After all, I’m one of many people that has been complaining about how vampires have lost their monstrousness over recent years, and there is no pretence of actual romance between the two, or any suggestion that the biting was the right thing to do. It reads more like Andreas made a selfish decision and is trying to fix things. Besides, Dracula had telepathic and hypnotic abilities, so Andreas having those powers is fair.

What this story does amazingly well is use vampirism to explore transgender issues. Once turned, Finn finds himself going through a lot of the same stuff he did when he transitioned: isolation, lack of control over his body and unsympathetic doctors for starters. The super-healing vampire powers cause Finn’s body to “repair” changes made for his transition, which he understandably finds horrific, and makes being a vampire an endless transition.

Szpara’s vampires live in a version of our world where vampires have become known and regulated. There are blood banks and blood doner registries, a long list of laws and regulations on who cannot be turned into a vampire (which includes trans people, of course), and medical clinics that are careful to close before sundown. Again, I cannot stress how well Szpara uses vampires to convey what it is like to be trans. Best of all, these vampires burn in the sun, as vampires should. I’m glad I reread Small Changes over Long Periods of Time, because there is so much to this novelette.

One last thing, there are sex scenes in this story. Bloodlust is very literal.

I’ve been very interested lately in the progress of artificial meat technology. Some companies seem to be getting close to making convincing lab-grown meat affordable. Even if lab-grown meat does become affordable, I can imagine that despite its potential to address issues related to animal welfare, human nutrition and climate change, there will be a lot of people against it. You know, being artificial and all that. Even if the technology is accepted, I image there will always be a prefrence for the real thing.

A Series of Steaks follows Helena, a beef forger with a hidden past, as she is forced to complete an impossible order or have her secrets exposed. We then get a high stakes (I swear I didn’t notice the pun until I typed it) forgery story that keeps us hooked while exploring the implications and the mechanics of this meat printing technology.

Despite working in a legal grey area, Helena and her assistant Lilly are both likable and easy to root for. The characters, technology, and the Nanjing setting all contribute to a fascinating plot, and I found the end very satisfying.

This story was very different to Vina Jie-Min Prasad’s other Hugo finalist (Fandom For Robots), and from these two stories I am very interested in seeing what she writes next.

Generation ship stories tend to be good at making me emotional, and Wind Will Rove is no exception. This is a story about Rosie, a fiddle player and history teacher on a generation ship that has been travelling long enough to have a large population that has never known Earth, but not so long that the original crew are all gone. In that time, the ship has suffered damage to its databases, causing most of the information about Earth to be lost.

One thing about generation ships is that between people getting on and their descendants getting off, there will be generations of people who didn’t sign up for an interstellar voyage, but who nevertheless must spend their entire lives on the ship. Stories exploring the raw deal these middle generations have aren’t new, but I think Wind Will Rove deals with the potential of a generation ship losing its past in a very effective way.

Pinsker points out that there isn’t much incentive for these middle generations to cling to their past. Their experiences and issues are nothing like what the people of Earth had, and will be nothing like that of their descendants when the ship lands. They’ll never get to explore, or conquer, or discover, or even know what wind feels like. There is a clash between the people of Rosie’s generation and those older than her, who feel compelled to recreate all the culture and history lost when the databases were wiped and to preserve – unaltered – the songs and stories they still have, and Rosie’s students, who feel that this obsession with the past is meaningless to their lives and a distraction to establishing a culture that reflects their own experiences.

This clash isn’t just philosophical, it’s able to tear apart families, and it’s easy to see this desire to do away with the past cause problems down the track. This is one of the best stories I’ve seen for exploring the plight of these middle generations, and Pinsker sells it by showing us how easily our history is already being lost and purposely re-made. When Rosie plays a song that makes her think of a farm, her mental image of what a farm is subtly off. Even more amusing is the differences between the ship’s recreation of the movie Titanic and what everyone knows happened in the original. To be fair to the characters in this story though, we all know there was room for two on that door.

Wind Will Rove is an excellent story, that drives home the issues of generation ships, and discusses our relationship with history with more nuance than plenty of longer works. Definitely worth tracking down this story.

The winners of the Hugo Award will be announced on August 19. Like always, I’ve read a lot of great fiction in the lead-up to the awards, and I’m so glad there are no alien strippers getting boned by T-rexes this year. It’s so nice that there was no attempt to sabotage the awards.