As promised, I read a lot this month. A lot of that was short fiction, which I find harder to talk about than novels, but I did come across so many interesting stories. I also listened to the very first Hugo Award winner, Alfred Bester’s The Demolished Man this month, but this post was getting a bit too long so I’ll talk about that in a few days. Damn, getting through a full-length review of The Demolished Man without calling it Demolition Man at least once is going to be a challenge.

First things first, I read the graphic novel Monstress Vol. 1: Awakening By Marjorie Liu (writer) and Sana Takeda (Artist). It was amazing. The story is really dark, the artwork is beautiful, and there are talking cats. I’ll put off reviewing it until I’m up-to-date with the series though. I also read a newish Tor.com novella, and a lot of short fiction. 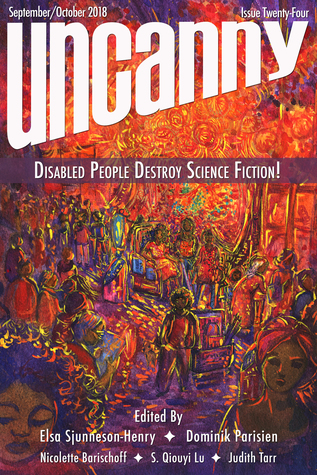 Disabled People Destroy is my first foray into the destroy series, and I’ll definitely be grabbing any future issues (I hear Uncanny is doing a Disabled People Destroy Fantasy issue next year). The essays were real eye-openers, and most of the stories were great. Most featured disability in some way, with my favourites being The Stars Above by Katharine Duckett, Disconnect by Fran Wilde, and the reprint By Degrees and Dilatory Time by S. L. Huang.

Another story that really stood out was Birthday Girl by Rachel Swirsky. I enjoyed the story, but was left scratching my head wondering what made it science fiction. Birthday Girl is about Bella going to her niece Natalie’s birthday party and watching her deal with similar mental health issues that she did. It was emotional, and really good, but I couldn’t see how it fit the SF brief. I was caught up for a while on the fact that Natalie is Bella’s biological daughter due to egg donation, and had fun thinking about how the story would have been received in an earlier time, when such technology was unheard of. Then it hit me; the fact that Natalie is growing up in a time and a society that can accommodate her Tourette’s and Bipolar Disorder is the speculative element of the story. The guests at the party are understanding when she has a meltdown, and her conditions are explained to the other children as individual challenges to overcome, just like not being good at certain things. Compared to Bella’s childhood, where she was called sick and left scarred from being placed in an institution, this is a radical view of the future.

At the same time, I was reading Analog July/August 2019. The main attraction in this issue was Adam-Troy Castro’s A Stab of the Knife, the long awaited meet up between two characters in Castro’s Andrea Cort universe. The Andrea Cort stories I find in Analog can be hit and miss for me, but I feel the reason why some miss is because I have only a very casual relationship with this series. Every few years I’ll see an Andrea Cort story in Analog, and how well I remember the characters and world at the time will greatly influence my enjoyment of the story. After reading A Stab of the Knife, I am now motivated to seek out the novels in this series. The first one, Emissaries from the Dead sounds interesting. One element that I liked in Stab of the Knife were the characters of Oscin and Skye Porrinyard. They are a single entity in two different bodies. A bit like Justice of Toren in Ancillary Justice, except the Porrinyard’s are still human, and having just two bodies (and the two bodies being opposite sexes) creates an interesting dynamic between the characters.

Another standout story was Marissa Lingen’s novelette Left to Take the Lead, which follows a young woman from the Oort Belt serving an indenture on Earth as her uncles try to bring the whole family back together. It was a wonderful character-driven story that despite being set in one rural part of Earth, manages to show us a vast solar system.

I should also mention Generations Lost and Found by Evan Dicken, which features a generation ship so short on resources that the crew are all extremely modified and specialised, to the point where the bridge crew spend their whole lives in their chairs and maintenance workers have long segmented bodies with no legs for crawling through access shafts; a necessity since failing air-scrubbers have made the hallways no-go zones. This setting and the descriptions of the crew were so creepy, and made me feel a bit claustrophobic, but the crew were happy, which made the story even stranger.

The Black God’s Drums is an alternate history story with steampunk and fantasy elements. Yoruba mythology is central to the plot, with the protagonist Creeper being possessed by Oya, goddess/orisha of wind. I only knew the very basics of Yoruba mythology, but the gods and powers that appear in the story were easy to understand and appreciate without being over-explained. The setting was also beautiful, being an alternate 1880s New Orleans where the Civil War ended in an armistice. Reading that, I’m reminded that Sarah Gailey’s River of Teeth was set in a different alternate history in a similar time and place (1890s Louisiana Marshland.) I did not enjoy River of Teeth, and one of the reasons I gave was that I didn’t know enough about the setting to appreciate the historical changes. The thing is, that is just as true for this story, and yet I loved it. I guess I just prefer steampunk to westerns, but that wasn’t all that sold this world to me. There is a lot of worldbuilding into this novella, really exploring how the American Civil War and the Haitian Revolution differed from our history and the affects these events have on this world.

The story is told from a first person view, and I loved Creeper’s narration. She talks just like how I imagine a 19th Century New Orleans street kid would talk, making the prose immersive. Most importantly, the characters were amazing; I really liked Creeper, and the plot was action-packed and super fun. I hope we can see more of Creeper and this wonderful world. 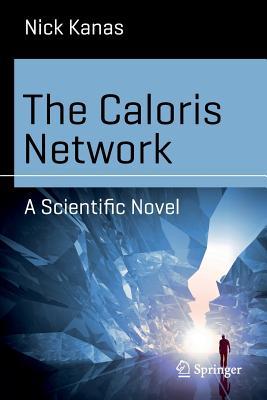 I did not enjoy this one. I’ve come across Nick Kanas’s non-fiction in Analog before. He is a Professor of Psychiatry and has written a few articles on the psychological affects of space travel that I’ve found interesting. I thought I’d be fun to check out his fiction, and I was wrong.

The Caloris Network is about a scientific mission to Mercury attempting to find the source of a strange signal. The source of the signal turns out to be a silicon-based alien. I’m not putting a spoiler warning on that, because the silicon-based alien is kinda the selling point of the book. It’s even in the title. I was looking forward to alien communication on Mercury, but before I could get immersed in the story, I noticed the dialog. On day 14 of the Mercury mission – that is, after months of travel together and I assume some sort of mission brief – the crew have a conversation which explains the history of the signal they’re investigating, and the radiation related risks involved. Not only is this a clumsy way to convey information that all the characters should know, but the exposition was delivered in long jargon filled monologs. Most of the dialog in the story feels clunky and un-natural. There are a lot of saidisms (“Kilborn interrupted”, “Akira intervened”, “Questioned Anthony”.) It’s not the worst dialog I’ve seen, but it was a chore to get through.

One reason I made sure to finish this story was to compare it to Hal Clement. I have so far enjoyed everything of Clement’s that I’ve read, but he also has a habit of making his characters give big lectures on the science. Why can’t I be so forgiving for Kanas?

I think it comes down to the pay-off. Sure, Clemet drops a lot of info-dumps and science lessons, but you are rewarded with an adventure on a crazy, seemingly-impossible world. Learning how things work in a Hal Clement story is fun. All Kanas’s Mercury has to offer is the alien entity and the sun. It is actually an important part of the story that the alien and the sun are the only two things of note around. The attempt to communicate with the alien could have been interesting, but while other characters do that in the background, our protagonist realises that she can just send her thoughts and feelings to the alien via telepathy. For some reason, she only figures this out after the main conflict of the plot has been resolved.

So how did a story I hate so much make it to a 5? Well, there is an in-depth science behind the story section that has some interesting information about Mercury and silicon-based lifeforms, including an explanation of the Clay Hypothesis for the origins of life. I still consider myself a carbon chauvinist, but I am rethinking that.

As an example of the ideas in the fact article, The Caloris Network works, but as a fun and engaging story by itself, it didn’t work for me.

I crossed an important milestone when I finished The Caloris Network. I have now read 60 books this year, completing my Goodreads Reading Challenge. Maybe I should push myself to do 100 next year. But for now, I have to go finish up that Demolished Man review.