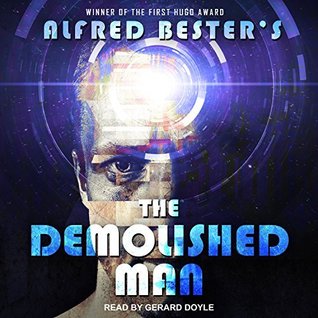 I tried to read The Demolished Man many years ago, before I truly got into science fiction. I heard a summery of the plot somewhere else and thought it sounded interesting, but didn’t go out of my way to track it down. A while later, after I’d nearly forgotten about the book, I was looking for something to read in a second-hand book store and came across what I thought was The Demolished Man, but was actually a novelisation of the 1993 movie Demolition Man written by Robert Tine. Yes, the movie starring Sylvester Stallone and Wesley Snipes. The one with the seashell gag. I realised pretty quickly I hadn’t gotten the book I expected. Ever since then, I’ve been meaning to read The Demolished Man, but just haven’t gotten around to it. Now, probably a good twelve or so years later, I’ve finally done it. So, was it worth the wait?

Yes. Hell yes it is.

The Demolished Man is set in a future where espers (of the mind reading variety) are a part of mainstream society. In a world where mind-reading cops is a normal thing, it is thought to be impossible to get away with pre-meditated murder. This is a story about business tycoon Ben Reich attempting to murder his rival D’Courtney without getting caught. Powell, an esper police officer, is soon on Reich’s case. It’s an unusual murder mystery, because detective and reader are both fully aware of the identity of the killer, but actually proving it (there are laws about reading someone’s mind without consent and the validity of esper testimony) is a massive undertaking. The middle of the book involves Powell and Reich moving and counter-moving against each other, and it was a lot of fun. I obviously can’t talk about the ending as much as I’d like for spoilery reasons, but I will say it was beautifully surreal and super creepy. I was reminded of the Star Trek episode Remember Me, and can’t help wondering if Demolished Man provided some inspiration.

The Demolished Man was written in 1953, and sometimes science fiction books don’t age well. Of course, how well a book has aged can often be a subjective thing. Demolished Man features a lush jungle on Venus, typewriters, a room-sized computer, a very 1950s Freudian view on the mind, and some of the female characters are a bit… well, good for the day, but still problematic. None of that made me enjoy the story any less. Unless you’re the type of reader who just can’t get into older science fiction, it should be possible to enjoy this book as much as someone reading it back in the 50s would have.

As outdated as the world of Demolished Man may be, it was still an absolute joy to read about. The technology, the slang, and the many different ways espers are integrated into this society make Bester’s world feel real. Even before the murder-mystery part of the plot kicked off, it was fun to just read about life in this future. This book had some amazing worldbuilding, and the characters were mostly enjoyable and fun to follow.

Bester’s writing style made everything in this book even better. In Harry Harrison’s introduction to the novel, he mentions that Bester cut his teeth in comic books and that his style reflects that. I had no idea what that could mean at first, but from the first scene I got to see the comic-inspired style first hand. Some of Bester’s scenes read as if he is describing frames of a comic book, and it works much better than I would have ever imagined. The Demolished Man feels fast-paced and action-packed. Since I listened to this as an audiobook, I also have to give some credit to narrator Gerard Doyle, who did a fantastic job bringing Bester’s characters to life. The only downside to the audiobook version is that I missed all the weird typographic quirks from the texts, such as names like ¼Maine (Quartermaine) and Wyg& (Wygand), and an exiled esper having the 2 in his rank crossed out. To be honest, I don’t think I missed much: those spelling choices probably would have annoyed me, but if you want the full Demolished Man experience I suppose actually reading the book would be the way to go.

One thing that did annoy me about this book was the main romantic pairing. It contained a bit of insta-love, a great power-imbalance, a super convenient revolution, involves a woman regressing to babyhood, and a lot of weird Freudian aspects that made it feel creepy. Though the characters involved seemed somewhat self-aware of these issues, which I think made it less bad, but still pretty bad.

Final verdict: The Demolished Man may feel dated in places, but it is still a very worthwhile read. And also, it is much better than Demolition Man. Don’t confuse the two.

2 thoughts on “Review – The Demolished Man”